The role of overseas investors in the London new build market 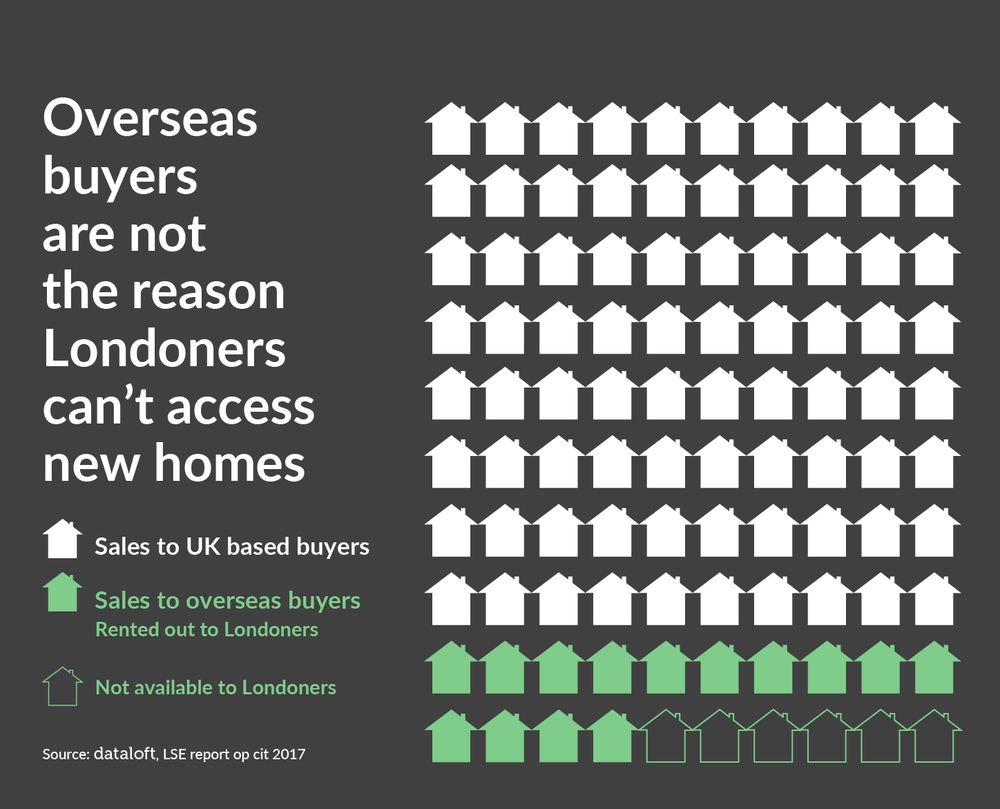 In the same week as the terrible fire in Grenfell Tower, a report slipped quietly out from the Mayor’s office on the role of overseas investors in the London new build residential market[1]. The research was undertaken by the LSE, on behalf of the Mayor, to address an issue that has nagged at the London residential market for years. Given the timing of the publication, most journalists shied away from writing about it and some of those who did, chose to take a swipe at the paucity of hard data rather than to reflect on the key messages.

But the LSE report was important because overseas investors have repeatedly been blamed for almost every aspect of London’s housing crisis – the responsibility for rising prices, falling affordability, shrinking communities and growing inequalities have all, at various times, been laid at the door of overseas citizens buying London’s new homes.

The Mayor commissioned this study to seek definitive answers on how many new homes are sold to overseas owners; whether they are left vacant and if new homes would be built at all without overseas capital via buyers or funders. It set four questions:

The research team dug deep to uncover new data but there is no definitive, comprehensive source of information on who buys residential property and how they intend to use it – or indeed how they end up using it. As the researchers themselves acknowledged: ‘the evidence available is relatively limited, often partial, and sometimes difficult to interpret. The research process was therefore rather like assembling a jigsaw using both quantitative and qualitative elements. Inevitably the results include some important gaps.’ That is where the skill and sector experience of the research team counts – to find meaning and insight in a mix of hard and soft data.

According to their research, between a third and half of all new units in Central London are sold to overseas buyers but the proportion declines with price and with distance from the centre. So, their best estimate for the proportion across the whole of Greater London from 2014 to 2016, was that less than 20% of new builds were sold to overseas buyers. Academics at York University estimated 13% from their analysis of Land Registry records. The next question from the Mayor was how that overseas buyers use their properties – as homes or as investments.

The LSE researchers reported that overseas buyers, predominantly from Asia and the Middle East, buy for one of three purposes: to earn a rental income; to house family members (notably students), or as a London base for work-related or holiday visits.  Investment for rental was the reason in 70% of cases, meaning that these properties were occupied all year round by people living in London, albeit as renters rather than owners. They estimated that, ‘on reasonable conservative assumptions, Londoners may be excluded as tenants or owners from perhaps 6% of new build units’.

On the thorny question of ‘buy to leave’, the LSE team found that less than 1% of new build bought by overseas investors are left entirely vacant.

The study also explained the role that overseas capital plays in boosting the delivery of new homes. Developers rely on pre-sales to fund development and overseas buyers are both familiar with the pre-sale process and unconstrained by UK mortgage offers. What is more, almost all of London’s large scale building projects have drawn on overseas money to finance various stages in the development process. Without overseas investment, the research concluded, fewer homes would have been built in London, including affordable homes.

There is no doubt that the type of stock built in London has been skewed towards higher valued apartments in response to demand and that, inevitably, has raised the average sale price for new build, but the obvious question is what, if anything, could have been built without that overseas capital. It is beyond the remit of this research to ask what other types of housing could have been built if public money had been available. In any event, new build sales are a small proportion of all sales in London so the impact of overseas investment in new build, on prices in the wider market, is described as ‘limited’.

I co-wrote a study for Westminster City Council back in 2014[2] which on impact of prime residential investment in Westminster and in that study we cautioned against ‘the danger of a simplistic public debate’ observing that: ‘The debate about high value housing in central London has become more public and more intense in recent years as values have spiralled and as the visible presence of overseas money has become more obvious’. We found ‘little tangible evidence of widespread year-round vacancy in Prime properties’ and that “The data do not support the hypothesis that the Prime market is fuelling house price rises more generally.”

In his election manifesto, Sadiq Khan talked of ‘too many [homes] sold off-plan to overseas investors, only to sit empty”.  As Mayor, he asked for the evidence and LSE has delivered evidence which contradicts that statement.  So, is it time to draw a line under this issue once and for all?

Right now it feels as though there is no topic more important than the provision and management of social housing in the capital. But the Mayor’s research was intended to inform policy development on new build over the longer term. As the UK negotiates its way out of the EU it feels more important than ever to put to bed the simplistic headline-grabbing habits of blaming overseas investors. It has, for a long time, felt very uncomfortable in a city that is proud of its international economy and cosmopolitan outlook.  As the Mayor’s slogan goes: ‘London is open’.

[1] The role of overseas investors in the London new-build residential market. K Scanlon, C Whitehead and F Blanc, U Moreno-Tabarez   LSE London for Mayor of London May 2017