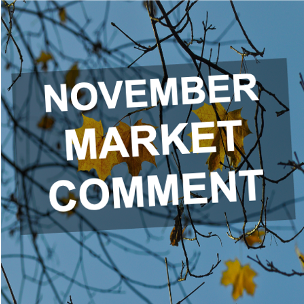 What a month-with two major news stories within hours of each other that are likely to have a positive effect on the UK housing market: the US election result, and the discovery of a Covid-19 vaccine.

We know that stability and confidence underpin so much in the economy–jobs, inflation, interest rates, mortgage approvals, the stock market, general investment, pensions, and of course property transaction volumes and house prices. Increased certainty generates the confidence on which so much hangs.

However, although the end of the pandemic is now within sight, it won’t be instant, with continued local lockdowns likely until the whole country is immunised during the latter part of next year. Although the economy rose by 15.5% from July to September, we are by no means out of the woods in terms of redundancies, with unemployment26% higher than it was this time last year. The extended furlough scheme might help, but people are still unlikely to move house until they have certainty that their future is secure.

Having said that, there is a possibility that the SDLT concession, worth up to £15,000 and due to expire in March next year, could possibly be extended to counter this. We don’t have any inside knowledge on this, but it has been mooted.

Either way, demand still outstrips supply, and, according to the Halifax, house prices have risen by 7.5% in the past year to a record £250,547. This is likely to be a more accurate reflection of sentiment than the Land Registry’s reported figures which always lag the market by 2-3 months.

Sowe can expect to see a slowing down in the rate of growth. That 7.5% is simply not sustainable and in fact, last month’s rate was just 0.3% compared to 1.5% in September. Don’tworry though-this is simply balancing out of this year’s post-lockdown pent up demand. I imagine we’ll continue to see modest growth, which, all things considered, would be pretty remarkable, proving once again how robust the housing market is as an investment.

With this rather mixed bag of variables, our advice to our sellers right now is “sure–be ambitious, take advantage of the demand, but think carefully before turning down a serious offer from a well-qualified buyer–you won’t want to be stuck on the market over the winter.”

If you’d like any advice as to how the current climate could affect your moving or investment plans, please don’t hesitate to contact us on 01242 25733 or 01452 597994 for a free overview, with a smile and no obligation.