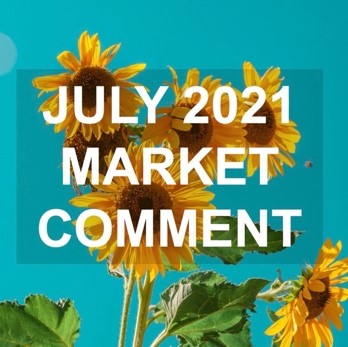 What a crazy summer to date, with Zoopla predicting a record 1.5m property transactions this year – that’s up 45% on last year! The unexpected consequences of the pandemic and the Stamp Duty concession following right on the heals of that Brexit-related stalling market, pushed the market into a frenzy. (Although it’s interesting to note that 68% of home movers said they would have moved even if the stamp duty holiday had not been extended).

You may recall last month the Nationwide reported a whopping 13.4% annual rise in house prices. Well according to the more conservative Halifax, who reported a 9.6% annual increase in May, the monthly figure actually fell 0.5% last month – leading to a slight reduction in the annual rate of growth. This is probably a good thing as things, including the property market, start to return to normal.

But the frenzy, where 38% of properties sold over the asking price, is far from over yet and we are as busy as ever, as people realise that you can actually lead the lifestyle you want without being chained to the office. Demand is still very high and there is a race for space, especially for properties with gardens and room to work from home.
One of the problems this frenzy caused was gazumping, where a seller accepts a higher offer from a second buyer prior to exchange of contracts, even though they have already agreed terms with someone else. Although this is unlawful in many countries, it’s not in the UK and, according to Comparethemarket.com, 39% of buyers in the last 12 months admitted they had successfully secured their home by outbidding another buyer whose offer had already been accepted. That means over a third of arranged sales fell through for disappointed buyers. We certainly don’t encourage gazumping, and, as the market begins to settle down, would urge our sellers to avoid the temptation to upset an arranged sale in most instances, as it can often end in tears.

In terms of the rental market, according to Goodlord, average annual rents having risen by about 8% this year, quickly reflecting the rise in house prices. They say that the average void period between tenancies in England is now 16 days, down from 22 days a year ago, although in many cases we find this is only a day or two. So that’s great news for property investors.
So the main message this month is, once again, to prospective sellers. If that’s you, then do act decisively here. This market simply cannot last forever. It won’t be long before we say goodbye to this extraordinary summer, perhaps interest rates could rise a bit to keep check on inflation, along with potentially higher levels of unemployment – there could be some redundancies announced, not only as furlough comes to an end, but also as the real effects of Brexit are felt across the economy.

If you think that you might want to move house in the next couple of years, ideally bring it forward if you can. And if you need to get a feel for what your property might be worth right now, please do call us without any obligation – you might be pleasantly surprised!