Is building homes in factories the solution to the UK housing crisis? 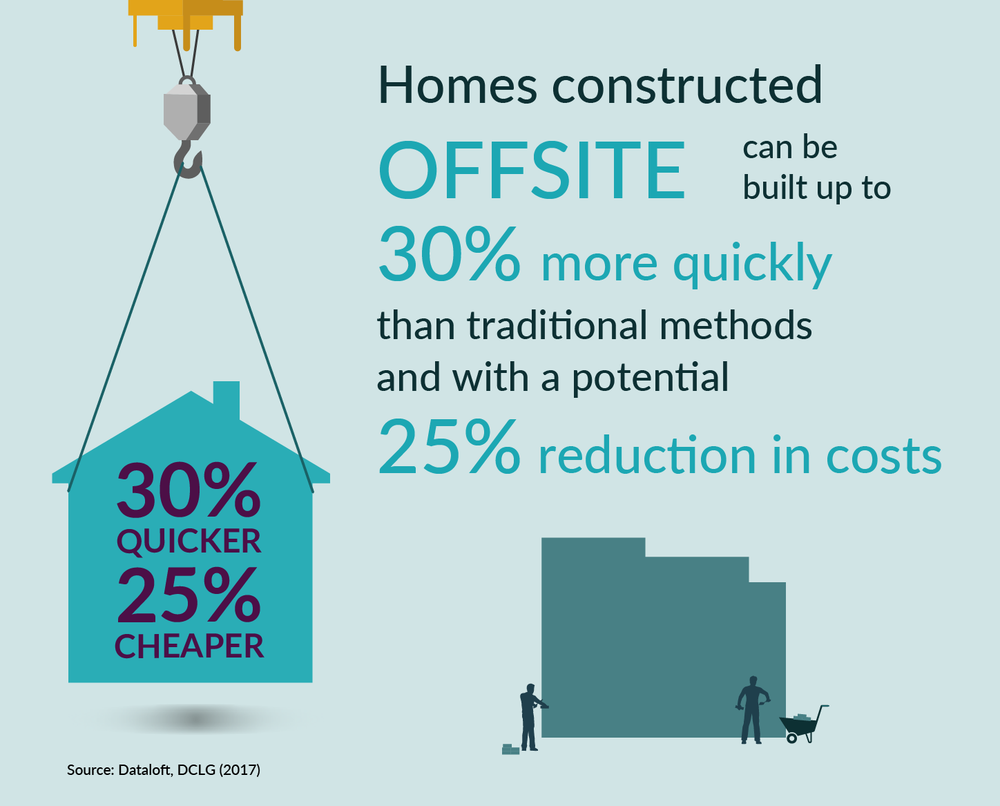 The chronic shortage of housing supply in the UK relative to demand has been a national issue for decades. The government are committed to delivering a million new homes by 2020. Yet with limited land availability, rising costs and shortage of skilled labour the government and the house building industry need to become innovative with regards to how housing is built of those targets are to be met.

The Lyons Review, updated in 2016, recommended the support of the expansion of modern off-site manufacturing (OSM) technology in the UK (for building modular homes), as this could play an important role in alleviating the pressure of labour shortages in the construction industry.

In The White Paper, the Government outlined initiatives to stimulate and support OSM:

Modular, off-site, factory construction – what does it mean?

There does not seem to be an agreed definition for OSM and this ambiguity has presumably not helped with promoting this business either within the house building industry or to potential residents. Essentially, it is a type of housing that is built (or significant components are built) off-site in a factory rather than on-site using ‘traditional’ building methods. Some OSM construction uses modular elements such as bathroom pods or bedroom/bathroom units which are craned into steel-frames and hence the phrase ‘modular housing’. Others include ‘panellised’ systems where wall units (including windows and other fittings), floor and ceiling units arrive flat-packed on-site.

OSM housing is a manufacturing solution to a construction problem. The UK Government has been trying to encourage manufacturing since 2010 with significant funding and praise for this industry sector so the growth of OSM for new housing helps the government achieve a boost to both manufacturing (if made in the UK) and housing supply.

OSM housing also has many other advantages including faster delivery times, the shorter on-site construction period which reduces costs, lower on-site wastage, more accurate costings, safety and less disruption for any neighbours of the site. Opening a factory, however, requires considerable investment and the consistency in demand for OSM is therefore crucial.

Currently, around 15,000 new homes are created using OSM, to some degree, in the UK each year This accounts for approximately 9.1% of new build completions and this level has remained pretty static in over a decade.

In 2015 Persimmon, one of the UK’s largest house builders, increased its housing completions using its Space4 timber frame kits manufactured off-site by 18%. This equated to 6,011 homes and 41% of Persimmon’s total output and we estimate that is circa 40% of all OSM in the UK. Persimmon’s off-site factory near Birmingham has capacity to deliver 8,000 timber frame kits each year. Some of the other leading housebuilders are also trialling OSM on a smaller scale.

Who are these homes meant for?

For many UK residents, perceptions of OSM housing is tainted by memories of the pre-fabricated housing that was quickly built after the second world war and all the problems those homes encountered, but technology and the manufacturing process has, thankfully, advanced considerably since then and homes or components arrive certified as defect free.

Many housing associations are also embracing OSM. In December 2016, it was announced that Your Housing Group (a UK housing association) had signed a landmark £2.5bn joint venture with a Chinese state-owned construction company (China National Building Material Company) CNBM to build 25,000 modular homes over the next five years.

Custom build is another sector of the market that could contribute to growth in OSM in the future although currently self-build and custom build taken together only account for around 10,000 completions per annum, so a similar level of output to OSM.

Interestingly, OSM is now contributing to construction across the whole price spectrum of the UK residential market, including the top end. The luxury Merano Residences on South Bank designed by Rogers Stirk Harbour and Partners are modular and the last apartment to be sold had an asking price of £4.3 million. The UK is also the second biggest Huf House (German OSM) market in the world and country’s most expensive house went on sale in February in Surrey with a price tag of £5 million. Berkeley has also sold its first modular home at a more affordable end of the market in Kidbrooke, South London but has publically made a commitment to dramatically increase its OSM production in future.

The commercial sector has shown that quality is no barrier to modular construction methods. The Leadenhall Building, (or ‘The Cheesegrater’) in the financial heart of the City of London designed by Rogers Stirk Harbour + Partners. It is already considered to be one of the finest tall buildings in the world and yet more than 80% of the components were modular (built off-site).

Who are the key players?

Urban Splash, a niche mixed-use and innovative developer who has been a significant player in many regeneration schemes around the country, is intending to manufacture between 70% and 80% of its homes off-site.

Last year there were some significant commitments made to OSM in the UK. Before Your Housing Group’s JV announcement in December, Legal & General revealed in February that it would be opening the world’s largest OSM factory in Leeds. L&G have opted for cross-laminated timber which will allow them to develop a variety of housing types from detached, semi-detached and terraced up to 20-storey apartment blocks at a rate of up to 3,000 units per annum, a proportion of which will be held as part their build to rent portfolio.

Berkeley Homes launched their ‘Urban House’ in June which they were aiming to entirely manufacture off-site in future and by September publicly committed to 20% of their construction being modular which based on the number of new homes they completed in 2016 would equate to 3,550 per annum.

The first units are destined for L&G’s planned development Crowthorne in Berkshire within the next couple of months.  Homes will arrive on site, even with carpets laid and certified as defect free. Erection should only take a day and the only other jobs on site would be foundation work and connecting the services.

Richmond Housing Partnership are also planning a 30 unit affordable rent scheme using modular units from L&G and by doing so aiming to save between 28% and 31% of build costs on a 26 sqm one bed apartment.

Construction giant Laing O’Rourke staked £125m on its OSM factory in Steetley, Nottinghamshire, with a further factory earmarked for modular housing due to be built soon.

It may come as a surprise that already 10% of new homes (or some new home components) are constructed off-site. Many of the larger players in the market have been making significant strategic investments into OSM, with the build-to-rent sector looking well-placed to fit with this increase in OSM. Many of the OSM factories are not running at full capacity and so output could easily rise, if demand remains consistent. For output to increase significantly, investors would need to be confident about the demand trajectory.

Although to date much of the output has been for mass-market or ‘value’ products, including student housing, housing associations and the private rented sector (PRS) there is no need to sacrifice quality and OSM it can have a much wider application. With the rising costs of labour in the traditional construction sector, any initiative to reduce costs of production will be welcomed and several of the large players are now investing in skills training for OSM.